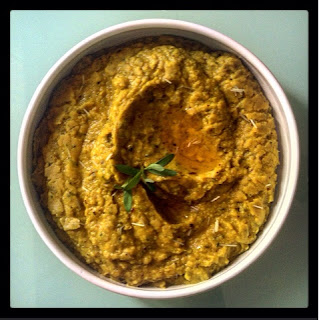 Red Split Lentils are just about the easiest curry you can make, with absolutely no compromise on taste. Though I do take my sweet time to prepare any kind of food, I reckon this took me half an hour this morning, in total. I did go off and do some sewing whilst the lentils were boiling, but that's besides the point. Boil time was under 10 minutes, (after having soaked the lentils early this morning when I awoke). Total soak time must have been around two hours. When I saw that no more water was being absorbed it was time to cook! :)

Not everyone soaks these lentils, but I find that it cuts down on cooking time drastically, to a mere 10 minutes. 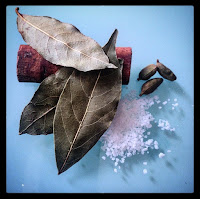 For this curry, I added a cinnamon stick, bayleaves, cardamum and salt to the water before adding the lentils. I would advise you to add the cardamum later on, in the 'turka,' or curry paste, Since the cooking time was so little, the flavor didn't come out too strong.


I added the tumeric once the lentils were cooked (after 10 mins). You may well wish to end the whole process right here and now, should you choose, and you'd still get a tasty meal, not to mention, very pure food. 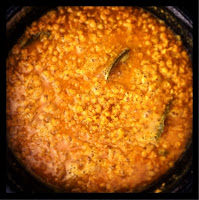 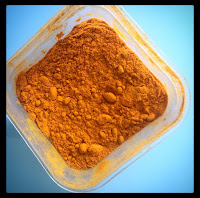 We will take it a step further though, for those of you who wish to impress a guest who pops in for lunch, and you need to whip up something quick! ;)


You'll see all the ingredients as well as full method below, but suffice it to say that the final step is a cinch, and makes a world of difference to this lentil curry.


Pictured to the left here are all the goodies that went into the ghee (clarified butter- cooked very slowly on low heat to remove milk proteins, and best suited for Indian cooking).

In the centre of the picture, next to the heart shaped ginger (you know me ;) ), you'll see a spoon, with a yellowish powder: HING, aka 'asafoetida.'
It's the smelliest thing in the world, but a perfect digestive aid, which couples very well in Indian cooking, especially for the legumes & bean curries. With a touch of hing, you can eat in peace, without anticipation of the dreaded after gas!
If you can get over the smell, you'll soon learn that you won't cook without it.
You don't use a lot, but if you don't use it at all, you just kind of notice that something is missing, though you can't quite put your finger on what that something is. It is indeed the stinky yellow powder!

I personally, didn't grow up using it, and was only introduced to the spice a couple years back, and must admit, I was fairly nauseous from the smell at first, but I don't go without now:).

What I learned today, is that Hing assimilates best in fat, so where I normally just add it to the lentils whilst they're boiling away, today it was the other way around, and I added it first to the ghee for about 15 seconds, before adding the rest of the spices.

Now, I've not quite mentioned that when you make lentils, it's not the usual curry paste (Turka), that is used - the typical, onion, garlic ginger combo with masala. Well, that's not how I do it anyway.
You use the same method- heat up your spices but only add ginger into the ghee, (no onion, garlic, masala), and once you've got that smell going on, after just a few minutes, add the magic to the finished lentils- easy peasy.

My lentils came out fairy thick and I did use a hand blender to smooth them out, (which you can totally skip). You could add yoghurt, cream, coconut milk, more water, to thin the mixture, should you wish (and sure, you could add a tomato at the end-sometimes I do, sometimes not. Try it for yourself).

How to make curried lentils - my style:

1- Add bayleaves, cinnamon stick, salt  lentils to boiling water. Scrape off scum from lentils, and cook for approximately 10minutes. The lentils will already be done (taste to make sure they're soft, and add more salt should you wish).
2- Add turmeric, and give it a good mix, allow to simmer on low heat, whilst you prepare the 'turka.'

3-Warm up ghee in pan, and add hing. Heat up for approximately 15 seconds, before adding everything but the ginger to the pan. Once you have a beautiful aroma wafting, add the ginger, cook for about a minute, and add the whole mixture to the lentils.

Yes, that's it :).
As always, play with your food. :)
Too thick? Add more water, or cream or yoghurt, or coconut milk.
Too salty, same as above.
Not enough of a curry flavour? Add more curry leaves, and coriander (I only had shoots on hand, but by all means, go nuts!). Speaking of nuts, you could add flaked roasted almonds on top, or even roasted sesame seeds (black ones would look beautiful on the yellow of this dish).

Go on, your turn to play and create.

Do let me know how you get on. AND as I'm new at writing out recipes, I'd love your feedback! Am I easy enough to understand? Are you getting all the info?
Please comment and ask away. :)

Peace & Love with all that you are and do <3